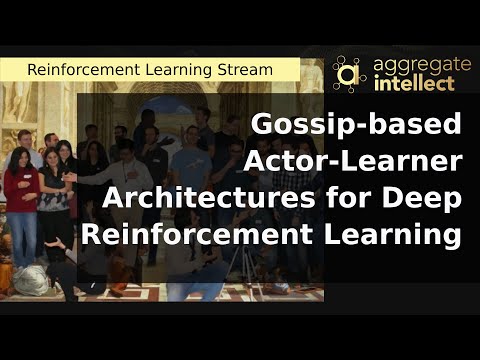 Multi-simulator training has contributed to the recent success of Deep Reinforcement Learning by stabilizing learning and allowing for higher training throughputs. We propose Gossip-based Actor-Learner Architectures (GALA) where several actor-learners (such as A2C agents) are organized in a peer-to-peer communication topology, and exchange information through asynchronous gossip in order to take advantage of a large number of distributed simulators. We prove that GALA agents remain within an epsilon-ball of one-another during training when using loosely coupled asynchronous communication. By reducing the amount of synchronization between agents, GALA is more computationally efficient and scalable compared to A2C, its fully-synchronous counterpart. GALA also outperforms A2C, being more robust and sample efficient. We show that we can run several loosely coupled GALA agents in parallel on a single GPU and achieve significantly higher hardware utilization and frame-rates than vanilla A2C at comparable power draws.