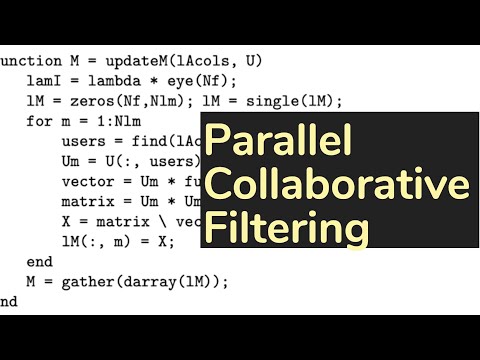 Many recommendation systems suggest items to users by utilizing the techniques of collaborative filtering (CF) based on historical records of items that the users have viewed, purchased, or rated. Two major problems that most CF approaches have to contend with are scalability and sparseness of the user profiles. To tackle these issues, in this paper, we describe a CF algorithm alternating-least-squares with weighted-λ -regularization (ALS-WR), which is implemented on a parallel Matlab platform. We show empirically that the performance of ALS-WR (in terms of root mean squared error (RMSE)) monotonically improves with both the number of features and the number of ALS iterations. We applied the ALS-WR algorithm on a large-scale CF problem, the Netflix Challenge, with 1000 hidden features and obtained a RMSE score of 0.8985, which is one of the best results based on a pure method. In addition, combining with the parallel version of other known methods, we achieved a performance improvement of 5.91% over Netflix’s own CineMatch recommendation system. Our method is simple and scales well to very large datasets.